Dina Torrans, born in 1967 in Canada, is a multi-media artist in Toronto. Raised in Toronto, she is an only child and now married. Her parents both worked in artistic fields: her Father was an illustrator and Art Director; and her Mother is a musician, a music teacher, as well as being a talented interior decorator. So she has been influenced from early on, and she was always interested in making things. She’s now a multi-media artist in Toronto, doing sculptures, paintings and photographs.

She studied in the Special Art Program at Central Technical School of Toronto. She learned about this school because her father had studied at the Art school there in the late 1950’s, where, amongst others, Doris McCarthy (a famous Canadian artist specializing in abstracted landscapes) was one of his teachers.

Her majors were Sculpture & Design, and this post-secondary fine-arts program gave her a solid base of technical training in a wide variety of visual art mediums. Professional artists and instructors delivered high-caliber technical training in Sculpture, Drawing and Painting, Design, Photography, etc. as well as an extensive foundational Art History curriculum. So her academic education contributed also to influence her in a variety of artistic fields.

Most of her jobs have been related in some way to her artistic pursuits.

After she graduated, she spent a decade working in the Sculpture and Printmaking departments at Central Technical School as an Instructor and as the Sculpture Technician. This developed her understanding of techniques and gave her a solid base of skills from which to develop her own style and approach to art making.

During her Central Technical years she met and worked alongside a number of very talented artists engaged in their craft, and these years inspired her future works.

Indeed while teaching at Central Tech, she started a house painting business which specialized in custom interior wall finishes. She also worked as a Sculpture Technician and made molds and castings for others. She made and sold a series of limited edition stone clocks for a time in the mid 90’s – they were available at a number of fine art gift stores and fairs in and around Toronto. Here is one of the Now clocks in the Time Peace series of limited edition stone clocks. 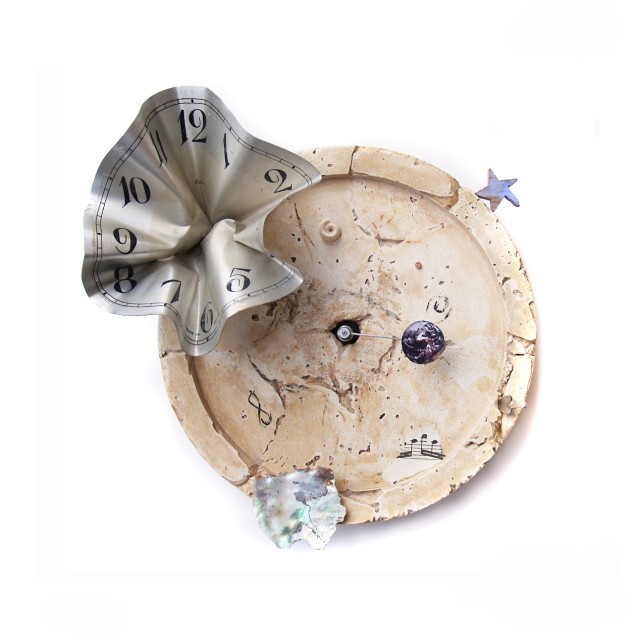 She also taught art classes at Kids camps, Wellness Centers, Private Homes and Art Galleries, and she has designed and landscaped a number of urban gardens too.

She began designing digital artwork for print and the web in 2000. And she’s actually the Creative Director at ArtDesign.to– a full service graphic design studio in Toronto, developing projects for both print and the web. She has produced hundreds of successful campaigns for a wide variety of diverse clientele.

Her first public exhibition outside of Art School was held in a gallery at 80 Spadina Avenue in Toronto. She created an installation of three large scale  musical instruments, which looked like stone titled: Homage to Theodor Geisel. As you may notice in the picture below, these musical instruments were actually made of paper mache.

She received much enthusiasm and encouragement early on that convinced her, in times of doubt, that she was good at doing this, and also because she loved doing it so much, she continued.

This first exhibition led her into making a series of instruments for a while. And she is currently working towards creating new work for her next solo exhibition, which will be taking place this November 10- Dec 2 at the Canadian Sculpture Centre in Toronto.